ANCIENT ROME: IN PURSUIT OF BEAUTY

Discover the original influencers: the Romans and beauty

Make-up, skin care and beauty treatments were as popular in Ancient Rome as they are today. Discover the original influencers, how Romans dyed their hair, reduced winkles and used make-up artists to create their look… 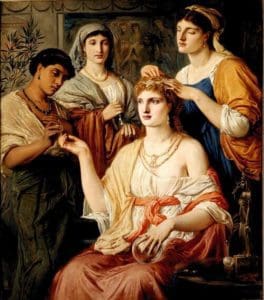 In Ancient Rome make-up and perfume were exclusively used by women as a means of expressing individuality, wealth, health, status and beauty. The Romans continued the culture of make-up and beauty from their Greek predecessors, but elevated to a new level.

Skin, hair  beauty products and fragrance ingredients were collected across the Empire as far as China.  Initially used in ceremonies and rituals cosmetics soon became part of daily life for the elite and less wealthy alike. Working-class women could afford cheap make-up, but may not have had the time (or slaves) to apply it . Using make-up at the time was a time-consuming affair because it needed to be reapplied several times a day due to weather conditions and poor quality. Cosmetics were applied in private, usually in a small room where men didn’t enter. Cosmetae, female slaves that adorned their mistresses, were especially skilled and highly valued. They would beautify their mistresses with cultus, the Latin word encompassing makeup, perfume and jewellery.

Contemporary history and literature in Ancient Rome was written by men so beauty regimes weren’t widely chronicled outside the Roman bathhouses, but art, archaeology and occasionally literature reveal glimpses of its importance.

“Why should I see what makes your skin so white? Keep your door shut and don’t let me see the work until it is finished.”

He suggested that he didn’t want to see the art or artifice behind beauty. Whilst Ovid wasn’t on TikTok or Instagram he did come up with his own beauty treatment and recipes. He also commented ‘you will find boxes and a thousand colours’ which is exactly what archaeologists found with multiple pots and bottles, make-up applicators, combs, creams and perfume bottles with residues remaining. So it seems make-up was as popular and central to women in Roman culture as it remains today, but what did their version of beauty look like?

Documented in literature, the Romans revered:

Given most women in ancient Rome were naturally blessed with glossy thick dark hair, a dark complexion and strong profile, (much as you would expect to find today across Greece, Italy, Turkey and the Middle Eastern regions) it seems they were burdened with the same curse we face today: to aspire to a version of beauty that is rarely unobtainable by nature alone. So if it didn’t come naturally how did they try to achieve it? beauty treatment and recipes

VANITY TO DIE FOR?

Skin was whitened with face masks and lead powder – even then it was known to be poisonous, but it was felt that beauty was more important! Eyebrows were darkened and joined with antimony or soot. Kohl made with saffron, ashes, soot or antimony for dark sultry eyes applied with a glass, ivory, wood or bone sticks dipped into either water or oil before applying it to the eyes. They also used colourful eyeshadows made out of minerals and colourings:  to make green, they used malachite while blue came from azurite.

Some fashionable cosmetics, such as those imported from Germany, Gaul and China, were so expensive that the ruling law tried to limit their use in 189 BCE. These original “designer brands” spawned cheaper copycat versions sold to poorer women.

In the unforgettable words of Fleabag, “hair is everything”, a sentiment as true today as it was to the Romans. During Covid lockdowns with no access to hairdressers, some of the top Google search trends of 2020 were hair related (how do I colour my hair, how do I cut my own hair, how do I style bangs and the list goes on).

Back to the Romans: coveted were Golden and Auburn locks, neatly styled. For an Empire with few fair haired women, it comes as no surprise that hairdressers were in fierce demand. It was deemed essential to stay in your hairdresser’s good books in case they did anything untoward. So lacking today’s salons, foils and peroxide how did they achieve the look?

But hair treatments didn’t always go well, so wigs were also very popular to hide white hair or hair damaged by dyes and treatments, made with real hair with blonde hair imported from Northern Europe and black hair from India.

The Ancient Romans also made creams and lotions to fight and hide wrinkles, pimples, sun spots, freckles and flaking. These masks were a mixture of lentils, barley, lupine, honey or fennel blended with oils, oregano seeds, sulphur, vinegar, goose grease, basil juice and hawthorn. Sometimes they added an essence of rose or myrrh.

Spots were cured with a mixture of barley flour and butter and for sun damage the ashes of snails and a face cream famous in its day was Londinium Cream: a mixture of animal fat, starch and tin whilst other ingredients used included placenta and even excrement. 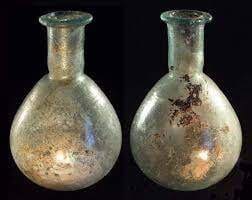 PERFUME: follow this link to see the top Google search trends of 2020

And of course, it goes without saying that an extensive array of perfumes were given pride of place on every dressing table and part of every woman’s beauty regime. Wealthy women were never found without an impressive sillage of the finest rarest imported oils from across the Empire.  To find out more about the Romans and bathing, read our last blog.Electimuss is Latin meaning “to choose the best”. Each Electimuss scents is inspired by the glamour, theatre and legends of ancient Rome and their passion for perfume and their uncompromising quest for the best.

Explore our daring and decadent perfumes inspired by Rome.