The Mighty Rose: The Muse of Many

ROSES have been an eternal muse to artists and perfumers. Discover the history of the rose, in the arts, in perfumery in symbolism...

Roses have been renowned for their scent for as long as records of humanity go. They are revered by humans throughout the ages and beloved by the Romans and woven into Roman mythology (read more about Venus, Cupid and Psyche). Even Cleopatra was said to have scented the sails of her ships with roses to announce her arrival on the winds.

Their scent and beauty has inspired countless artists, poets, writers and obviously – perfumers. One of the most fabulous and evocative artworks featuring roses is The Roses of Heliogabalus – a painting by Sir Lawrence Alma-Tadema that depicts a banquet hosted by the young Roman emperor Elagabalus, at which the guests were said to have been buried in a shower of roses and violets.

The Roses of Heliogabalus by Sir Lawrence Alma-Tadema

EMPEROR NERO is said to have done exactly the same to some unsuspecting dinner guests, and the story is also retold in the Satyricon (The Book of Satyrlike Adventures a latin work of fiction by Gaius Petronius) . In the painting, the rose petals swirl through the air, smothering the guests. Each petal and flower is beautifully rendered, a flurry of reds, pinks and whites. People look on as though it is a beautiful sight to behold, rather than an exquisite drowning in roses.

The earliest extracts (or extraits) of rose, as we would recognise them today, date back to Persia around 1000BCE were called attar. In fact, Attar (or ‘otto’) is a Persian word meaning scent.

The earliest steam distillation methods were perfected by Ibn Sina (often latinised as Avicenna) – a polymath of the medieval world responsible for many advances in chemistry, medicine and across disciplines – to obtain rose attar (and as a by-product, rose water). This transformed perfumery, and the steam distillation method has barely changed from Ibn Sina’s methods. Now rather than steeping fragrant plants in oils or fats as the ancients did, essences could be obtained much more purely and with greater consistency.

The advent of rose water also meant a greater use of roses in food and drinks – used to perfume and flavour delicious desserts, blended with cream to make kulfi, the petals are used for making teas and jams, and for flavouring chocolates.

In recent history, roses have been viewed as romantic and delicate, traits ascribed as feminine, therefore not befitting a man. This has been the case in the West since the advent of marketing in perfumery in the mid-1900s. But that wasn’t always. Historically, throughout the Arabian and Indian peninsulas, rose fragrances have long been worn by the well-to-do, marking a symbol of opulence and status, rather than gender.

Following the turn of the millennium and the advent of niche and haute perfumery, the rose has once again shifted its position back to a place of enjoyment for all genders, as it deserves. Roses have myriad facets, and can be worn  by anyone brave or bold enough to wear them. They still represent a symbol of romance, making roses the perfect fragrances for Valentine’s Day.

Find out more about the many different facets of rose in perfumery in our next blog post.

Nick is a fragrance evaluator, co-founder of scent consultancy Olfiction, and has frequently appeared on radio, television, and in print media sharing his insights on the fragrance industry.

As a perfume industry consultant, trainer and writer, he has over 20 years experience in retail, marketing, training, development, story telling, copy writing and editorial.

Committed to improving education in perfume industry, with a special interest in evaluation and development, as well as vocabulary and empowering consumers, retailers and press with solid, accurate knowledge.

We are delighted to be working with Nick to create engaging and information content about perfumery and ingredients. 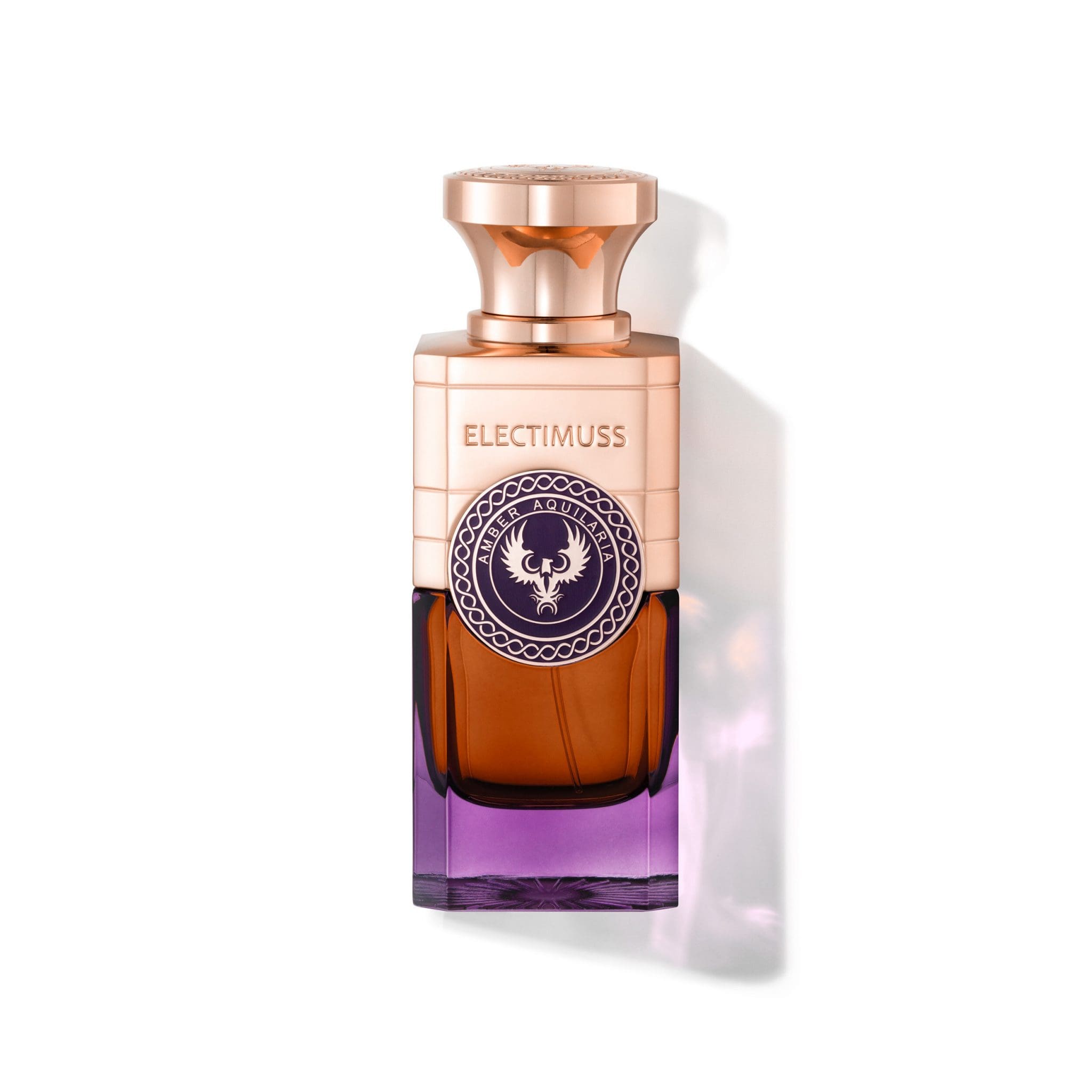 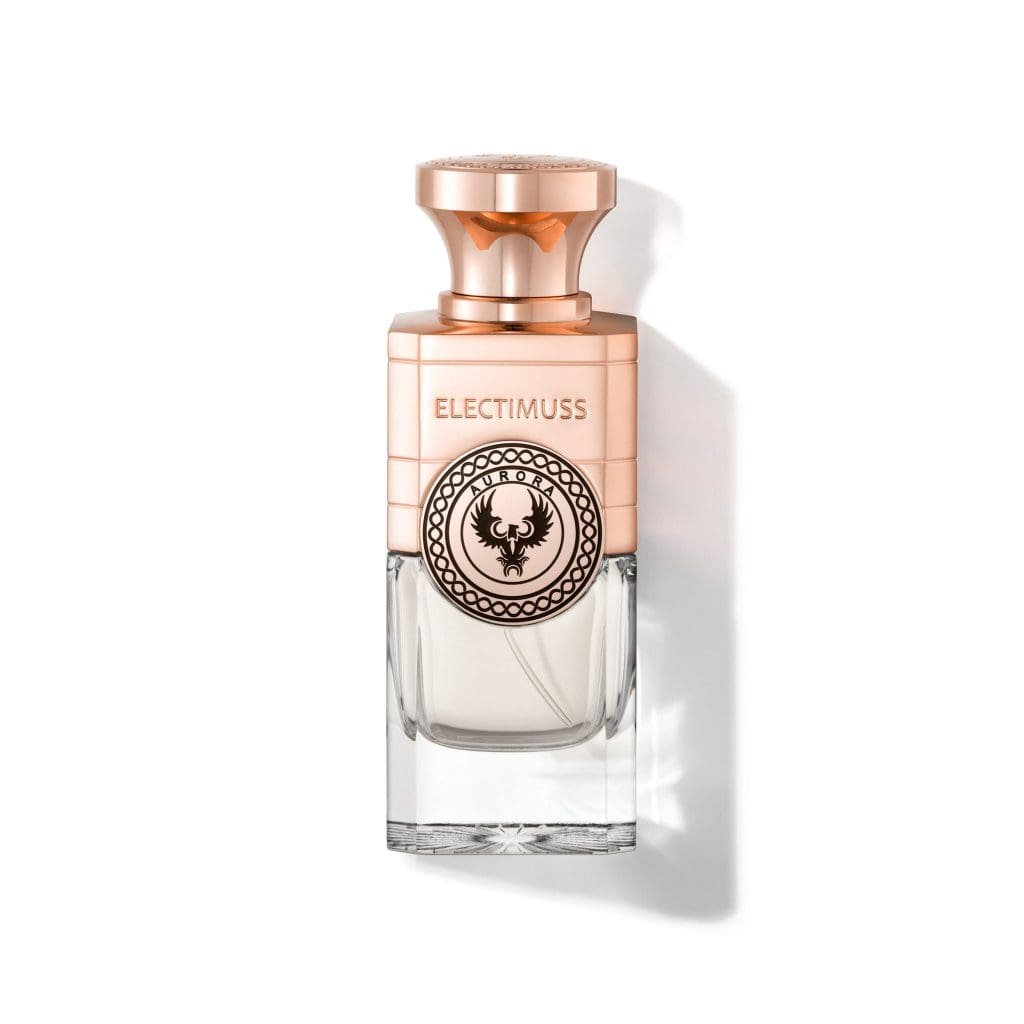 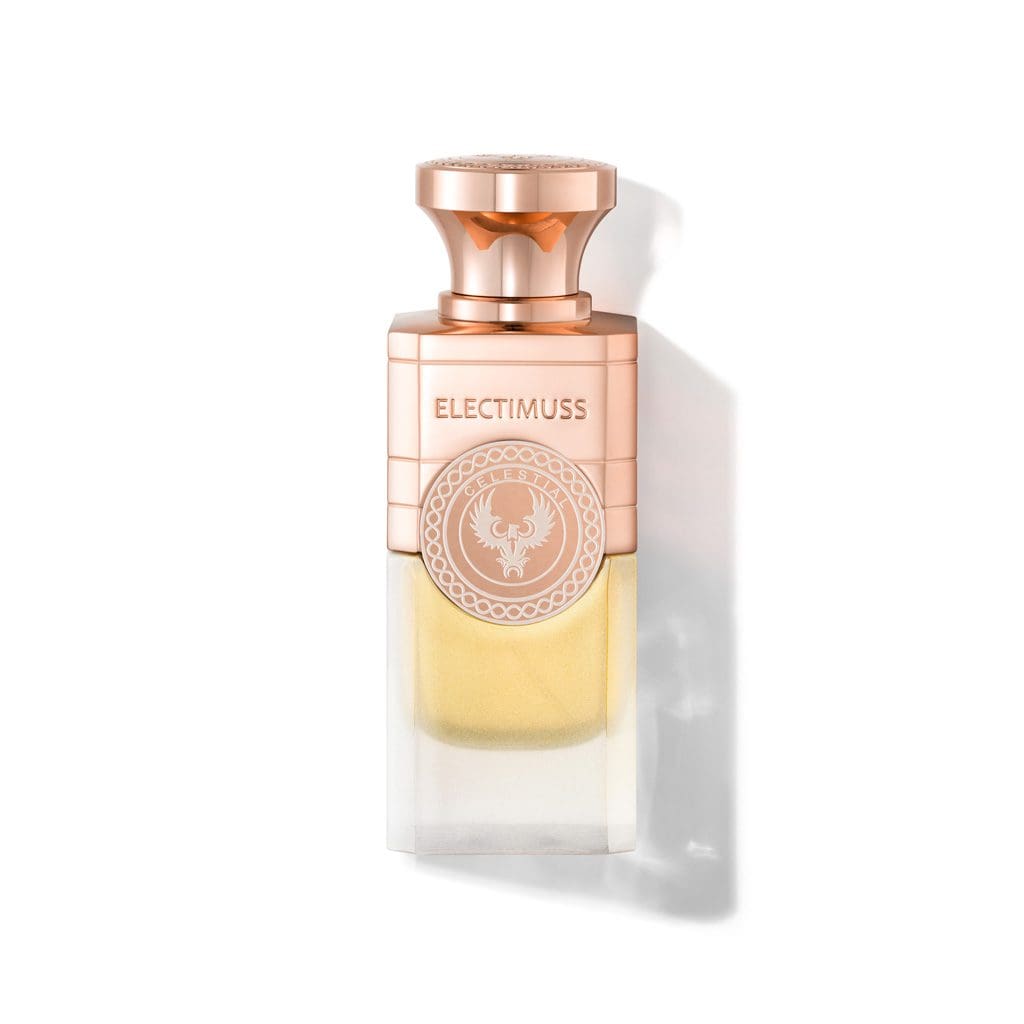 By Christian Provenzano Celestial is an amber woody floral with a heart of frankincense and exotic roses. Complex, light and very wear 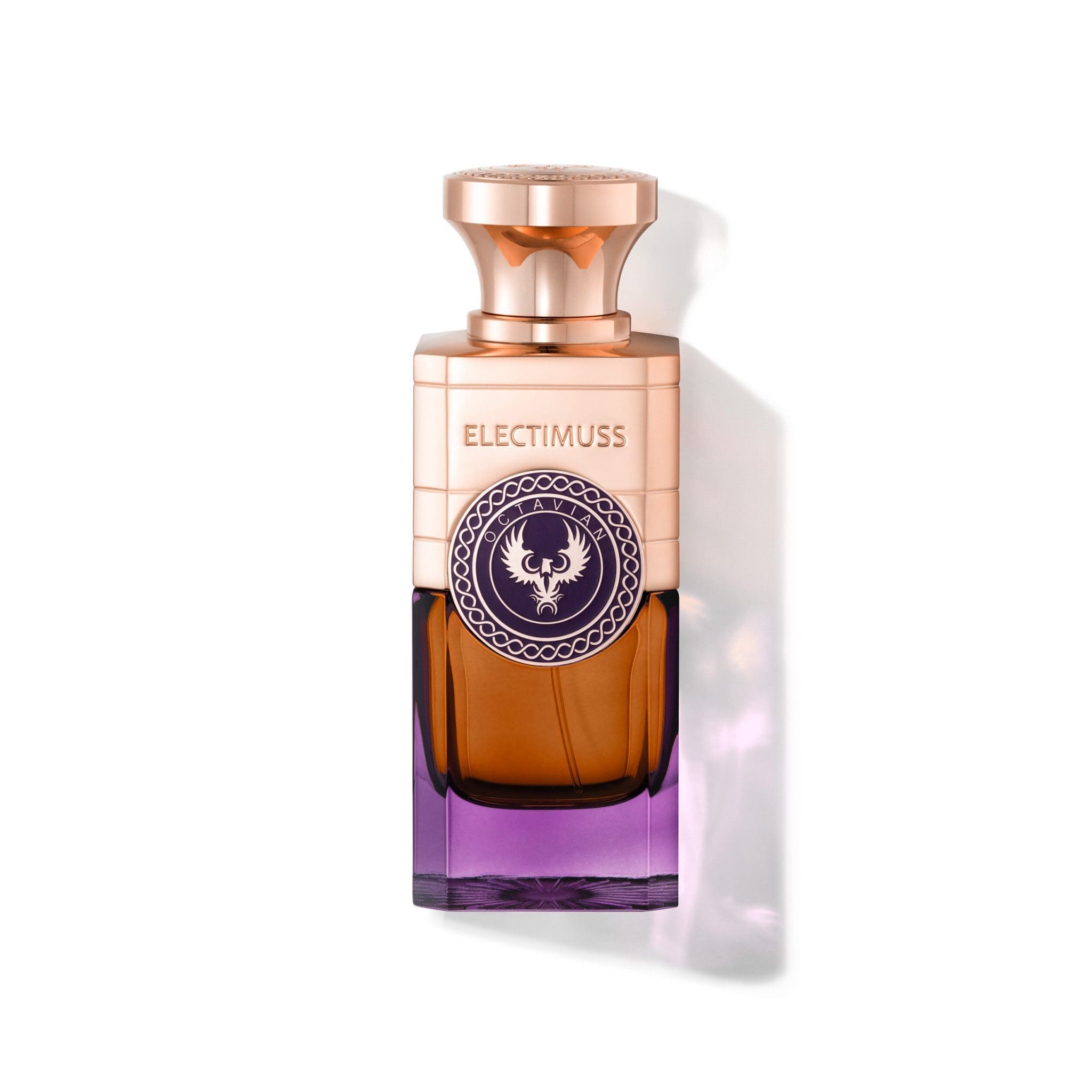 By Christian Provenzano This bold and spicy oud rose is a powerful, rich statement scent befitting an emperor. The blend is bold, daring and refined. 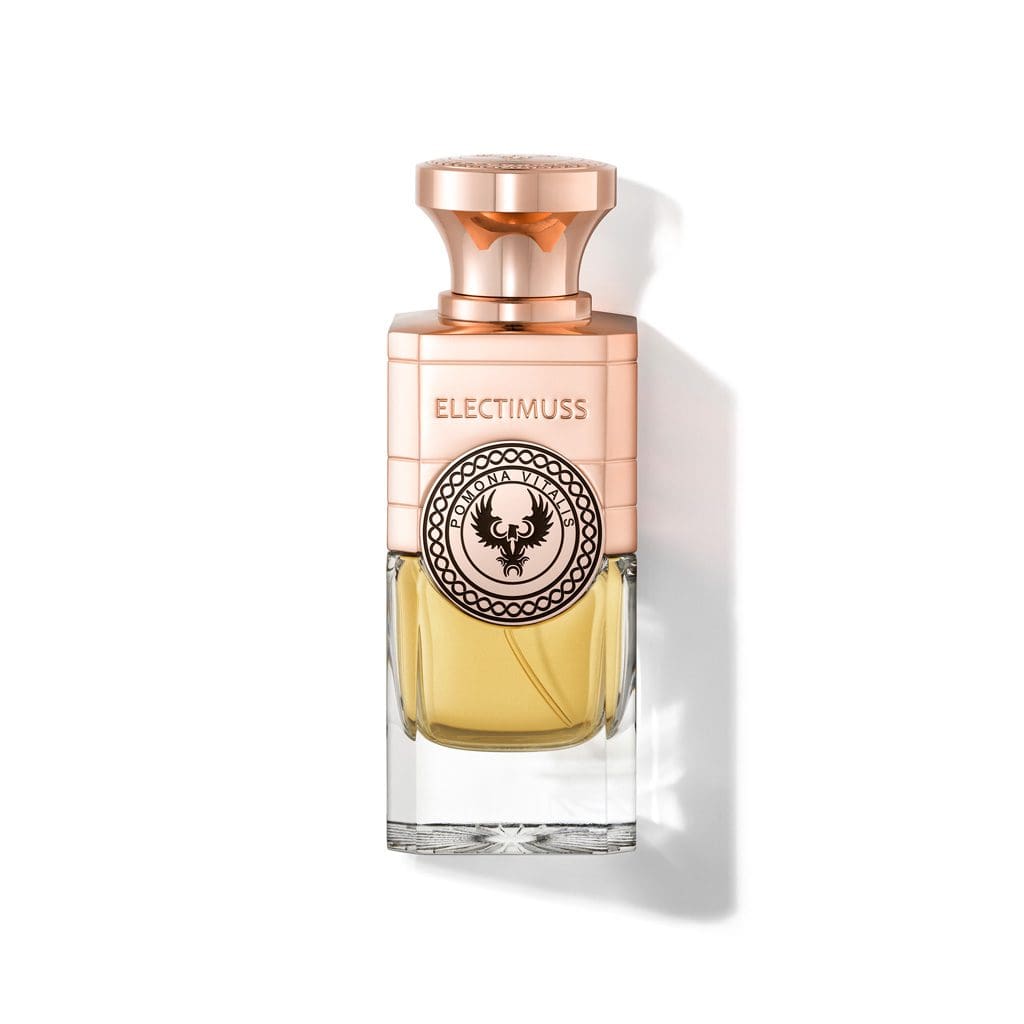 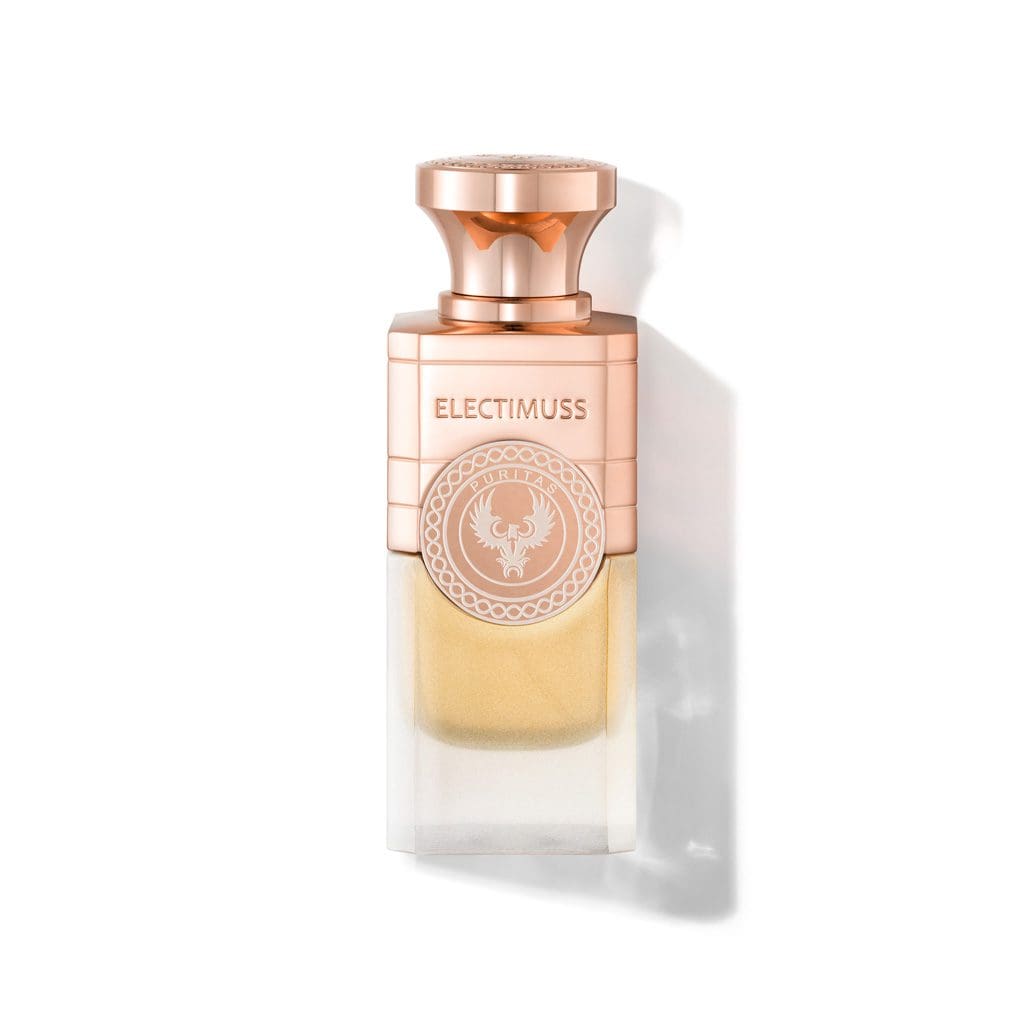 By Christian Provenzano This is a striking saffron and incense perfume with a floral heart and a warm leathery base. The frankincense 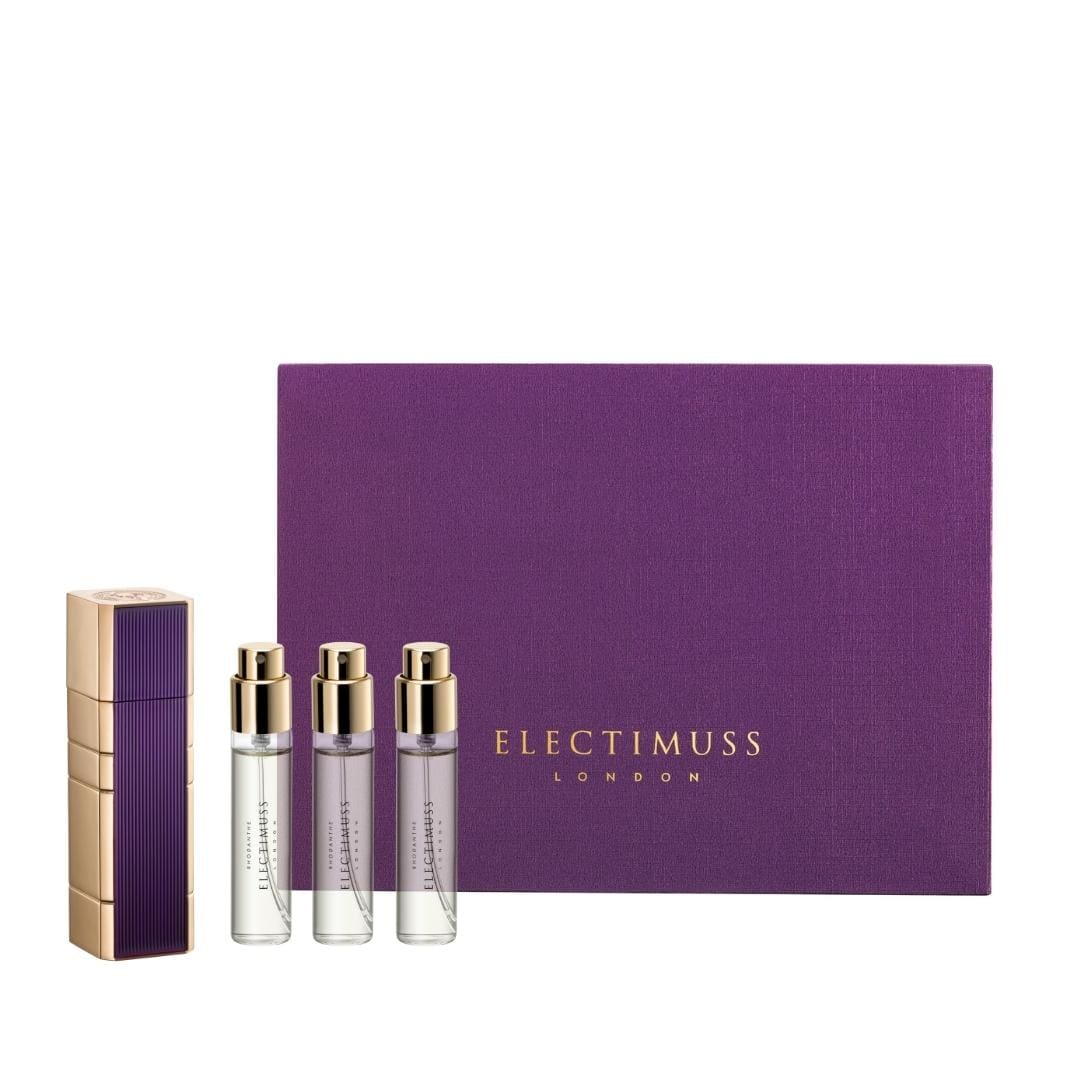 Electimuss is famous for luxurious, opulent bottles but now our perfumes can be enjoyed on-the-go with our new travel size sets. The luxury atomiser is an object of desi 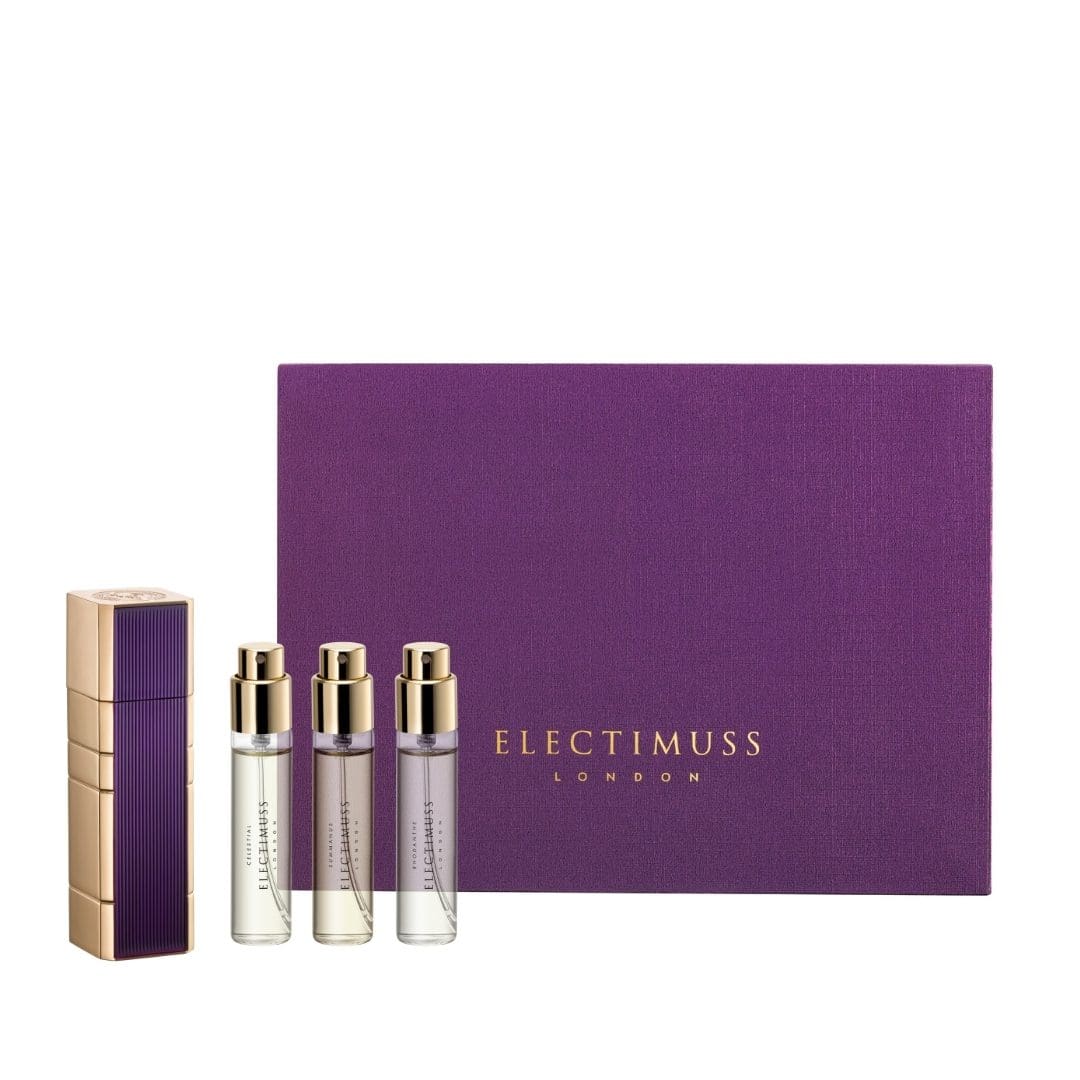 Electimuss is famous for luxurious, opulent bottles but now our perfumes can be enjoyed on-the-go with our new travel size sets. The luxury atomiser is an object of desire 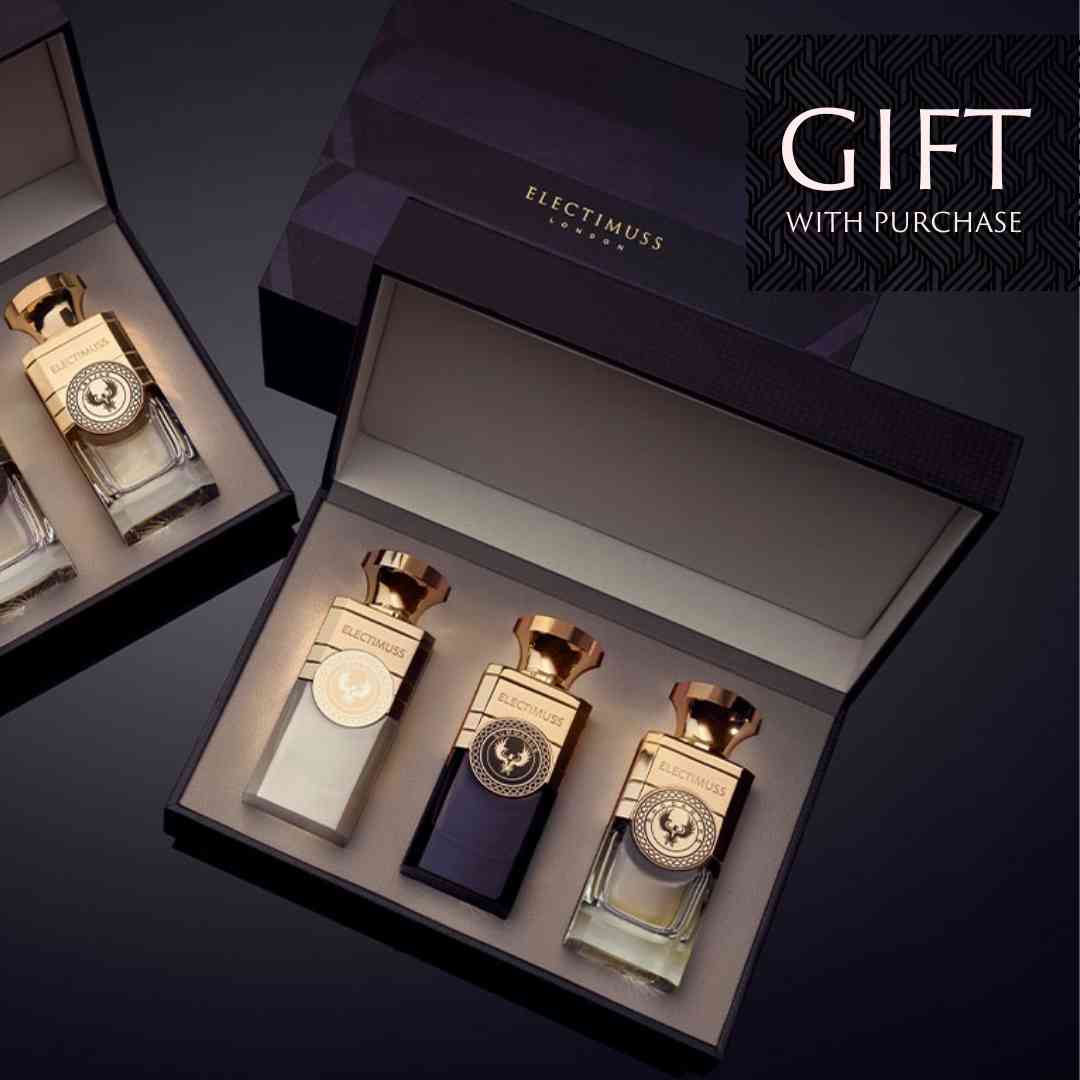 ROSE LOVER’S GIFT SET This gift set for rose lovers includes three of our favourite scents with rose at their heart. They are three quite different takes on rose, but all unmi 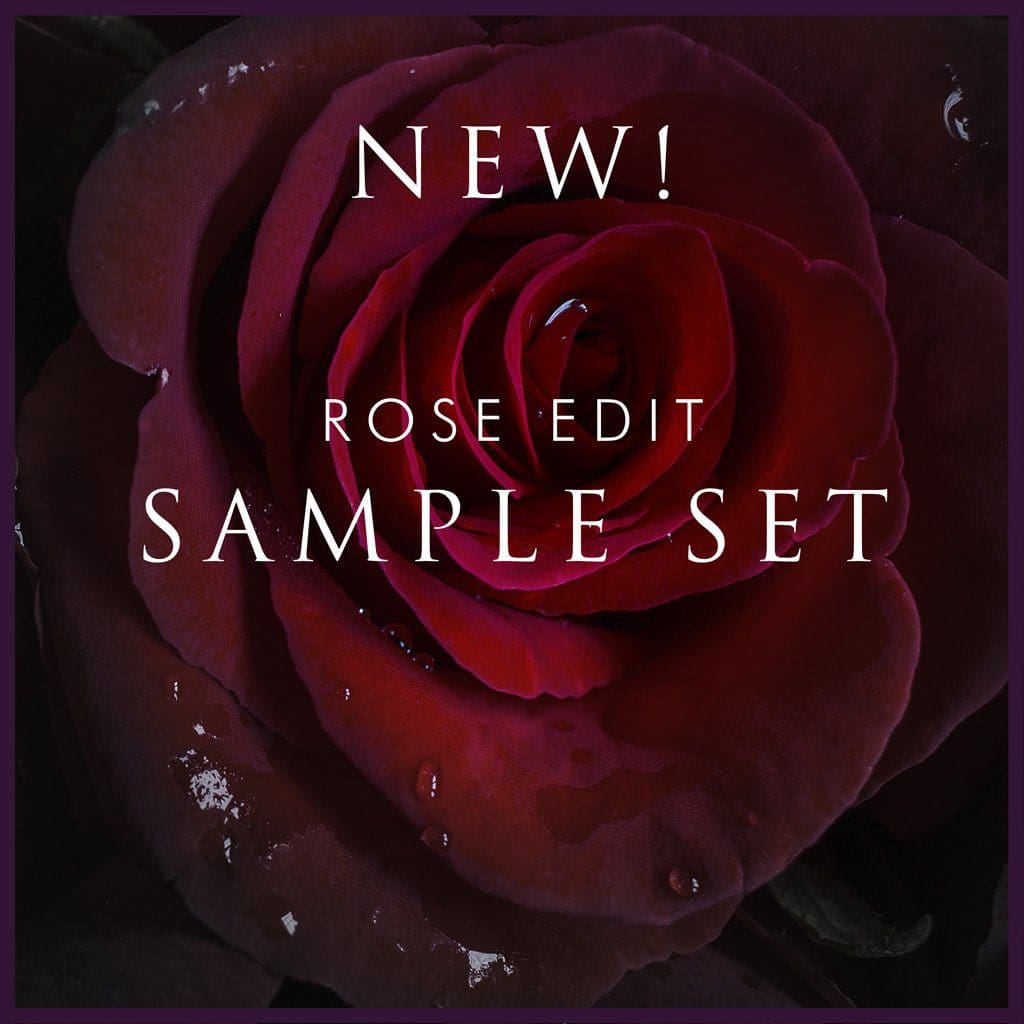 Sample our rose perfumes - we have a rose for everyone in our collections of fine fragrances. Sample set of eight rose perfumes in 1.8ml vials: Amber 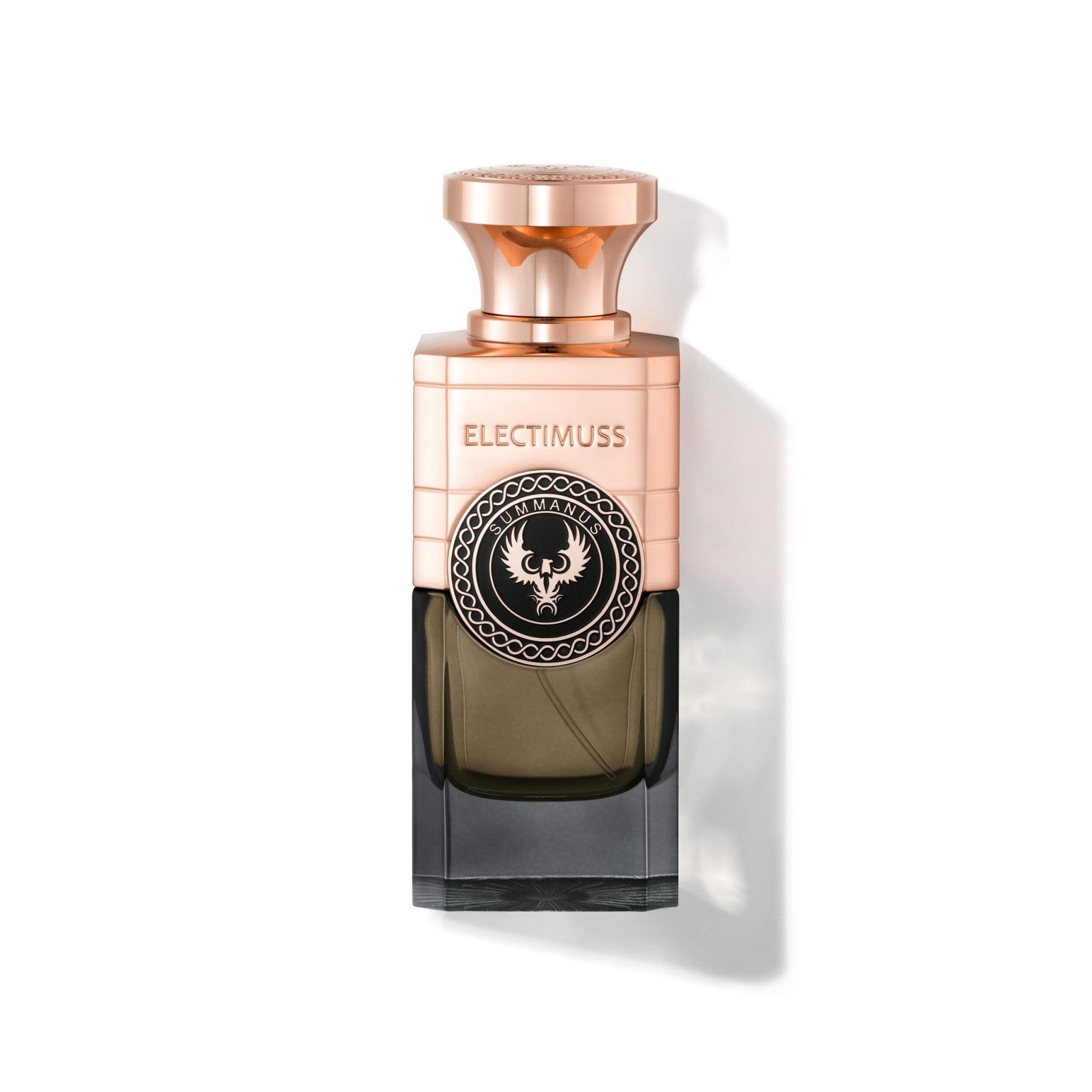 By Christian Provenzano This sensuous and rich amber rose opens with a fruity and fragrant bolt of cardamom, bergamot, orange, pine and ginger and melt