SPIN THE WHEEL OF FORTUNE

Fortuna, goddess of fortune, was worshipped in ancient Rome for her power to bestow riches and liberty. 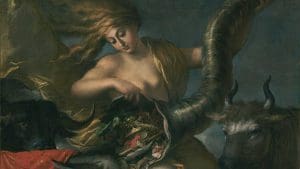 Fortuna was worshipped in ancient Rome for her power to bestow riches and liberty – her name derived from the Latin ‘fortunatus’ meaning happy, lucky, rich, blessed. The Romans believed her to be bountiful, (like her father Jupiter), so it’s no surprise that she commanded cult status with slaves and plebeians. But beware, Fortuna is a fickle friend dangling fortune and prosperity with one hand and ill fate and ruin with the other.

It wasn’t just the lower echelons of society who were tempted by her charms. She was associated with virtus “strength of character”. The Romans believed that senators and officials who lacked virtues invited ill-fortune on themselves and Rome. To believe in Fortuna was to believe in being a master of your own destiny and creating your own fate.

“Truly, when in the place of work, idleness, in place of the spirit of measure and equity, caprice and pride invade, fortune is changed just as with morality”.Sallust on Catiline

As fickle friend, Fortuna was feared and revered in equal measures.

This dynamic perfume is as mercurial as Fortuna herself – bright, dark and seductive. The spicy fruity top notes quickly open into a radiant floral heart of lily of the valley, geranium and rose.

Blended Moroccan Rose absolute and Bulgarian Rose essential oils create a seductive, sophisticated heart. And the dark secrets of Fortuna lie at the base of the fragrance within Patchouli, Oud, Vetiver and Musk. The Haitian Vetiver is a deep woody aroma with nuances of grapefruit, smokiness and earth.

Succumb to her capricious charms – order samples and buy Fortuna in our shop.

Her influence weaves its way through history, literature, poetry, art, opera and astrology. The painting in this blog is just one – of many paintings. “Allegory of Fortune” by Salvator Rosa (1658 – 1659) caused uproar when first exhibited publicly and almost got the painter jailed and excommunicated. Sometimes referred to as La Fortuna it depicts Fortuna, the goddess of fortune and personification of luck, pouring her gifts on an array of undeserving animals. The painting is full of scandalous symbolism. Traditionally Fortuna has her eyes covered with the horn of plenty or Cornucopia upright suggesting that Fate is random and unknowing, but Rosa reversed this tradition suggesting Fortuna deliberately bestowing her gifts from the upended cornucopia. The symbolism in the painting is a deliberate expression of the bitterness the artist was feeling about the papacy in Rome at the time.

Ovid’s poem Oh Fortuna provides the lyrics for the epic introduction and finale to Carmina Burana by Carl Orff. “O Fortuna” is a hair raising, epic and iconic, famously used as the soundtrack to The Omen (amongst many other movies).

and always fades to nothing,

you plague me too;

now through the game

I bring my bare back

Fate is against me

So at this hour

strikes down the strong,

everyone weep with me.