Discover the Roman’s obsession with bathing and about the Public Baths, or Thermae, with gymnasiums, pools, and chambers where they enjoyed hot and cold treatments, were massaged pummelled and scraped and where they were finally anointed with luxury perfumes and oils. The Romans knew how to live well ..

By the time of Emperor NERO there were upwards of 800 ‘Roman Baths’ in Imperial Rome. These public baths, or thermae, were vast and grandiose, meticulous and extravagant in every detail, carefully architected and built with art, marble and sculptures. 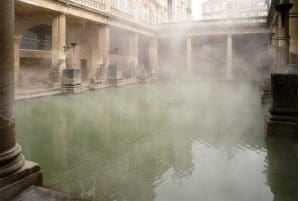 They housed gymnasiums, temples, libraries and a complex series of various bathing chambers to pass through before finally indulging with perfume. The original wellness spas, the Roman Baths were revered as a source of health, luxury entertainment and social gatherings.

On entering the Thermae, through a bustling concourse, the bathers progressed through a series of chambers. In the first chamber the bathers undressed and hired a guard for their clothes (it’s worth noting at this point that there were separate baths for men and women, and that it was not considered appropriate for men to bathe with close family members). Next, in the Unctuarium, they were anointed with coarse cheap oils before entering a series of chambers designed for exercise, bathing, massages, hot and cold treatments before returning to the Unctuarium.

The final chamber, the Unctuarium, or Chamber of Perfumes, was a veritable apothecary shop full of hundreds of jars, pots and vases holding the very finest perfumes and balsams gathered from across the Empire. At great expense and extravagance the wealthiest bathers would select and buy the finest luxury oils and unguents to be anointed and massaged as the final ritual before leaving the baths. The Perfumes that made up Roman olfactory favourites included: 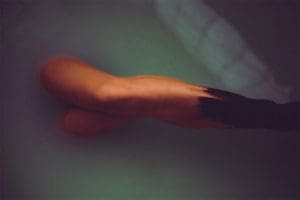 Some oils were chosen for specific therapeutic purposes like Serpyllinum, wild thyme, rubbed into eyebrows, hair, neck and head; and oil of Watermint, Sisymbrium and Anarcum were massaged into muscles.

All bathers passed through a series of chambers where they received different treatments and bathing rituals.

And throughout you would find a series of Solium – vessels to wash in, from basins large enough to allow immersion of the entire body to much smaller bowls designed for the ablation of the face or feet. Below these rooms was a complex Hypocaustum or furnace for heating the air for the rooms and the water in the boilers, before it was distributed to the baths.

Do any Roman Baths still exist? Claire, our Creative Director lives in the city of Bath, where one of the finest examples of Roman Baths can be visited. 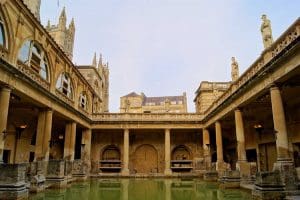 It is temporarily closed but the website has some really interesting floor plans, photos and videos and we recommend a visit when you can.

19th Century author John Bell writes about some of the most grandiose and notable Thermae:

“Of the magnificence of the baths of Agrippa, the Pantheon served as a vestibule to them. By his will Augustus bequeathed his gardens and the baths which went by his name to the Roman people, in order that bathing might be attended with no expense to the public. Still more rich and costly were the baths of Nero, erected in the spot now occupied, by the Justiniani palace, near the church of St. Eustatius. Martial, in one of his epigrams, asks— was there ever a more execrable man than Nero, and is there any building which equals his Thermaa in magnificence?

The baths of Etruscus, made free by the Emperor Claudius, also enjoyed considerable repute. The baths of Caracalla were ornamented with two hundred pillars, and furnished with sixteen hundred seats of marble: three thousand persons could be seated on them at one time.“

Explore our fragrances, inspired by the decadence and passion for perfume found in Ancient Rome.

WATER, AS A PRESERVATIVE OF HEALTH, AND A REMEDY IN DISEASE: A TREATISE OF BATHS Including cold, sea, warm, hot, vapour, gas, mud baths, hydopathy and pulmonary inhalation

A pdf can be found here.