A CHRISTMAS KISS
Or Gods at War?

The solar system’s two largest planets Jupiter and Saturn are set to create a dramatic close encounter, also called ‘great conjunction’, where they appear to ‘kiss’ on Monday. Not only has this not been visible to the naked in nearly 800 years, but astrologers believe it to be linked to significant events throughout history like the Great Flood, the fall of Troy and the foundation of Rome. The last time the two gas giants appeared so close was in 1623 – but stargazing conditions at the time and position of the sun meant it was unlikely to be seen. Go back further in time to 1226 for the previous time such a “Great Conjunction” was observable with the naked eye, according to EarthSky.

How do you see it? 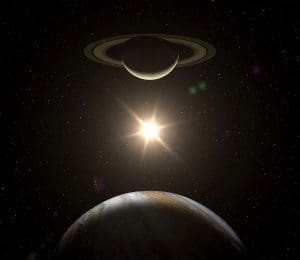 This “Christmas kiss” will be in the night sky on 21 December. It will appear low in the western sky for roughly an hour after sunset. Nasa said people should look to the  south-west in the hour after sunset when “the two giant planets will appear just a tenth of a degree apart – that’s about the thickness of a coin held at arm’s length.” Look out for a thin crescent moon and two bright objects right next to it.

Jupiter is the larger planet and those with very good eyesight – or a pair of binoculars – will be able to distinguish it from Saturn. To others, the planets will appear as a single star. Planets tend to shine more steadily – or twinkle less visibly – than stars, so that might help you differentiate.

The Star of Bethlehem?

You might ask “That is suspiciously near to Christmas day is there any relation to the Star of Bethlehem?” Good question. The Star of Bethlehem that guided the three wise men to the place of Jesus Christ’s birth may have been a great conjunction too. As the Encyclopaedia Britannica explains, several conjunctions occurred “within 10 years of the chronological point now taken as the beginning of the Christian era”.

One of these was a conjunction of Jupiter and Saturn, which in 7BC were within one degree of each other three times in eight months. The Star of Bethlehem could also have been Venus and Jupiter, which in 2BC, “would have appeared to observers in Babylon to have merged just before setting in the general direction of Bethlehem to the west”.

According to astrologers the great conjunctions of Jupiter and Saturn have been associated with great historical events (like we haven’t had enough this year). French astrologer and theologian d’Ailly observed such great conjunctions heralded or coincided with the Great Flood, the fall of Troy, the death of Moses, the foundation of Rome, and the advent of Christ.

“The Grand Conjunction sets the tone for the ethos for the next 20 years affecting the arts, music, theatre, literature, entertainment, designer fashion, food, music, mathematics, science, politics, and the government agenda. In other words, everything!”

Let’s hope this conjunction coincides with a safe a welcome departure from 2020.

“All astronomers are agreed that there was never one of those conjunctions
without some great and notable change in this world.”

Discover JUPITER fragrance, inspired by the king of the gods.